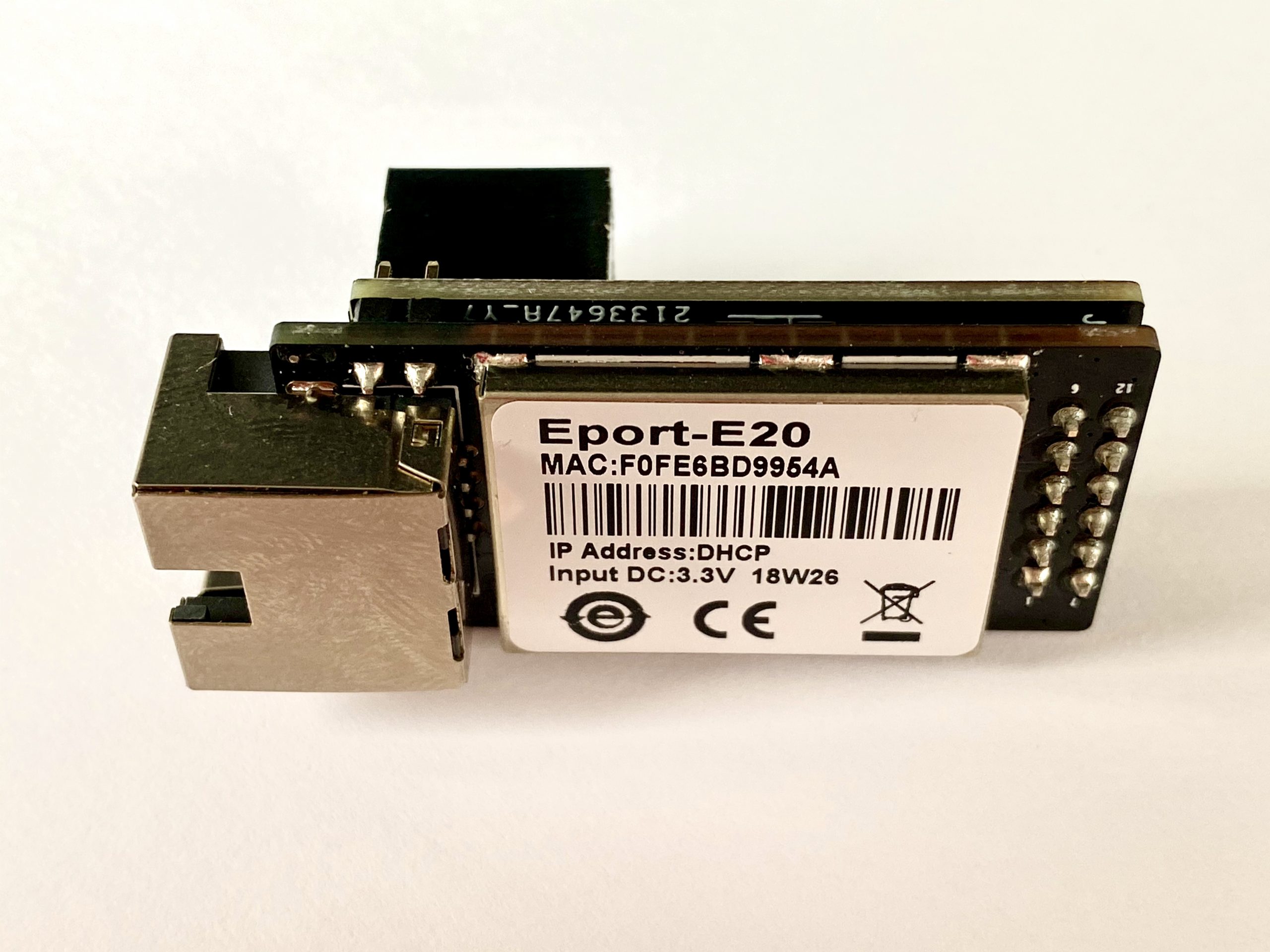 When I ordered the USR-TCP232-T2, I also did order some other ethernet modules to experiment with: The Eport E20. These looked better than the USR’s so I thought just try them to see how they work. And so the story began 🙂

Back to the drawing board (v2)

While designing at the same principle, I had to make some adjustments. This module doesn’t work on 5v, like the USR’s do (5v and 3v3 both). They only work at 3v3 and had to make therefor a 3v3 rail in the design. I used a very simple yet effective design:

Based on the same inverter and the power supply for the Eport E20, the design was made within 30 minutes. Now I had two versions: USR and E20. I noticed that my choice between those two would be most definitely the E20. This for 3 reasons:
1) E20’s are easier to get on AliExpress
2) There was a design flaw in the USR model (P1 header on wrong side)
3) The USR comes with a fixed ip (192.168.1.7) as factory setting, which I had to change to DHCP. The E20 by default had DHCP.
This is how version 2 looked like, much better if you’re asking me:

After selling about 20 of them, I noticed that there was a demand voor external powered modules. Users with older P1 meters (2, 3 and 4) couldn’t use these modules as the meter doesn’t supply enough juice on the P1 port. Because of the current design, I thought about making a simple power injector to overcome that, yet that was out of the question as that wouldn’t be a pretty design.

I knew I had to make a version with an USB header on it, to comply on the demands. I’m not making these as a product. Yet I want them to be usable for any P1 meter. After a short conversation with Quindor I knew I had to choose for USB-C connectors. His argument: why use old standards, as you’re designing for a future product? I had to agree with that. Besides that, there are like so many different micro-usb footprints, while the usb-c footprint is the same for most of them, what makes it easier for me to design without waiting for the connectors.

Next challenge was: how to prevent from usb-power getting into the P1 port and visa versa. I tested it with diodes, yet the power drop was a little too high for me, so I choose the old fashion jumper solution. Set the jumper for your own use.

The design was the same as v2, only with an USB-C connector and a 3-pin header added. Luckily there was enough space between my pcb and the E20, so no problem with finding a spot for the USB-C header:

Looking at the date of the design, May 25th 2020, that is about 2 months ago. Darn, I have to update my website more often 😂

While I was experiencing some issues with some of the delivered products, I figured out that the cause was a faulty mosfet. I guess (I hope) that is because of a bad batch mosfets. Though I only used the more expensive parts of Farnell, I guess that can happen too. Stil, while having enough pcb’s on stock, I wanted to try a different approach. Use a logic inverter instead of the mosfet (which works very fine). I also wanted to add some more capacitors, just for stability. So you probably guess it already … there came version 2.2 …

I saw this single channel inverter online, the SN74LVC1G04DBVR. It had some advantages which I wanted to use. The main advantages are:
1) high logic input voltage support (I have a 5 volt from the P1 port)
2) logical output voltage, same as vcc, so I can control what I want (3v3)
Most ESP’s are forgiving when using 5v ttl on 3v3 ttl input. Yet I didn’t know how the E20 is protected against that. Due to the high resistance I used, that wouldn’t be any problem. Than again, this gave me the opportunity to straiten that out in my design.

Again, based on the same design, I removed the old inverter and placed the new inverter. I had to keep one resistor as that is required for the pull-up of the internal optocoupler (dataline). The print is the same format, as it had to fit on the E20 pinout.

I knew that SOT23-3 is quite difficult to hand solder, yet I didn’t though that a SOT23-5 package would be a lot more “pain in the a..” to solder. Thank God for flux. I recently ordered flux to make sure the USB-C headers are soldered correctly. This came out very handy for those tiny little SOT23-5 packages 🤪😆

I’m very pleased with this new version. Same footprint, only designed better (and learned from the past).

While writing this blog, I’m already busy with some new changes and modifications, so stay tuned …